Regarding Arts
The KontrolFreeks the company sent us for testing. From left are the Havoc, the Phantom and the SpeedFreek. Click on the image to see our review.
KontrolFreeks are doodads that attach to the tops of game-controller joysticks, for the purpose of increasing speed, control and comfort. We were doubtful, but tried 'em and liked 'em. Read all about it. 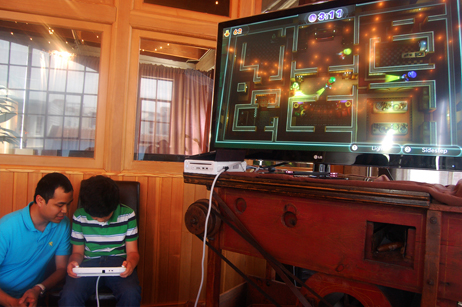 John Orr
With the help of Nintendo developer J.C. Rodrigo, Riley uses the Wii U controller to play a new variation of Luigi's Mansion that is still in development. Very fun game.
Something of epicosity
this way comes
By John Orr
June 19, 2012

Riley and Maria and I got a chance to play with developmental versions of the Wii U console on Monday, and gee, did we have fun. It is a very cool device!

Read more about the Wii U.